The catheter came out on Monday.  No pain but an interesting sensation nevertheless.  New dressings for my belly punctures.  Then a flow test.  Drink a litre and wait.  I got impatient and drank 2 more cups of water,  That worked!  200ML flowing well.  So I was allowed home.

Now…no-one warned me to wait till I passed the rest of the water!  Resistance was painful and inevitably futile!  Pad worked well…twice on the way home!

Picked up a great CD at the urologists.  Peter Tilbrook (ex Masters Apprentices) now The Party Cats…Let’s Go To The Movies.  Track 2 is called The Prostate Blues Song and relates his story along the same path I have just been.  Funny as!  It’s 50’s & 60’s music…great stuff.

Also I left the urologists with a 3 week prescription for Cialis.  This drug enhances blood flow to the penis.  Apparently research has found it is better to be proactive with this.  No waiting for erectile dysfunction to become apparent…get in early with stimulating the blood flow.

Before I see the surgeon again in about 4 weeks I will have another PSA blood test.  A zero reading for that will confirm the cancer has not spread beyond my prostate.

At home and I was not enjoying this relearning flow control thing!  Last time I did this I was what…2 years old?  Anyway no more major dramas just small ones…again the pads worked well.

More walking…a bit further each day.  Also worked from home…gotta love that connectivity!  Good distraction anyway.  But I was surprised how much it took out of me.  It’s just sitting in front of a computer isn’t it?

Friday I went back to see physio Di Semmler.  She was happy with my progress.

I was cautioned for trying a bit too hard with the flow control (pelvic floor) muscles…I was tiring them out by the end of each day.  She gave me some tips on teaching myself to condition my bladder to longer times between going to empty it…talk to it, walk half way to the toilet & wait.  After all it has just had a week and a half of not filling up while the catheter was in.

Next milestone is to try driving middle of next week.  I can drive the 4WD so long as I don’t use my arms and upper torso to pull and/or twist my way up into the seat.  Sliding out is easy enough.  No driving vehicles without power steering.

Lyn & I always wanted a big road bike.  We had the use of a 750 Honda in our early 20’s and it was sad to give it back.  Have had dirt bikes before then.  My dear mates all bought Harleys as they went through their respective mid life crises!  I couldn’t come at the dollars.  My brother reminded me of my interest in this iconic muscle bike in the mid 80’s.  I convinced Lyn we “needed” it now…not in our retirement when we couldn’t get a leg over it!  A lot of research later & I was headed for Sydney | NSW | AU.

Bought privately in Randwick (Sydney | NSW | AU), November 2004.  I flew over from Adelaide | SA | AU on a Saturday morning & rode it home.  First time I had a leg over a big road bike in over 20 years…way sore bum by the time I got home 2 days later! 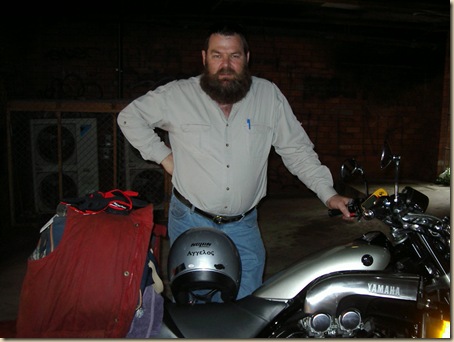 On the way home.  Dog on the Tuckerbox at Gundagai, NSW | AU…

In the middle of nowhere the max ticks over 10k, Hay Plain | NSW | AU…

For the first few days getting in and out of bed was awkward and painful. And I was still getting the strange gut contractions…they may have been bladder spasms.

By day 4 not much pain and 1 soft bowel movement.

Day 5 I had 2 soft bowel movements.  This is what the physio and the nurses most cautioned me about…DON’T GET CONSTIPATED!  So I became obsessed by this.

Drinking 3 litres of water a day is interesting.  Getting quite used to it.  More normal for me is juice , coffee, soft drink & beer.  Water only when I am seriously thirsty!

I run out of pain killers first, then the antibiotics but still had plenty of bowel softeners left.  Panadol in soluble form helped with reducing pain.  I even had a day with no Panadol…but that was too early.

I was concerned about bleeding into and new…bleeding past the catheter so I rang the urology nurse.  No panic just delayed removing the catheter for a week…bugga!

A week to the day post op the surgeon Peter Sutherland rang me with the pathology results.  All clear!  The cancer was contained wholly within the prostate and the adjacent tissue he removed was benign.  Best news ever!

He decided then not to wait a whole extra week to remove the catheter.  Even after I emailed him photos of the colour of my urine & the leakage past the catheter.

Lyn Stevens (wife) took me in.  She will be my nursemaid for the next 2 weeks.  See if I am still alive or just divorced by the end of it!

7am start.  I was first cab off the rank.  A bit of admin stuff (forgot my dressing gown), saw an admissions nurse & the anaesthetist (he said nothing about my beard…I trimmed it last night to a #6!).  Around 8.30am I am off to lala land.

Surgeon Peter Sutherland called Lyn by 11.30am to tell her all went well.  I woke up about 1pm.  Peter came to see me at the end of the day.  All the cancer was visibly contained in the prostate but he took some adjacent tissue just in case.  My guts (6 holes) and lower back (old injury) hurt.

Fairly sleepless night.  No shoulder tip pain from the gas used to inflate the body cavity (the other 2 with me in the ward…same operation…have the pain).  No appetite for breakfast.  A bit nauseous once during the night & once before breakfast…but no vomiting.  Had strange & painful contractions during the night…like a big gut wrench after a fright.  Seriously painful!

Di is a continence physio.  One of several on a list given to me by the urologists.  She is closest to me for work & home.

Di spent 1.5 hours with me.  I thought this would be all about pelvic floor exercises but that is just a part of it.  She extracted everything about my lifestyle.  Working, drinking, eating, exercise, recreation & toilet habits.

By the end of it all I was very clear about what I can & can’t do post operation…the "can’t do" is the bigger list.  For the first 2 weeks do bugger all besides rest up and walking…a little at a time.  It will be another 10 weeks before I will be back to my usual activities.  Stay off the motorbike & keep out of the 4WD!

Looking after the old prostate area and the rejoined urethra is a much bigger issue than women have to deal with post any hysterectomy or caesarean!

This started in the theatre block of the Royal Adelaide Hospital (RAH, Adelaide | SA |AU).

It was like a factory.  About 40 of us seeing nurses, anaesthetists, ward doctors & having blood pressure & blood tests & an ECG.  Took about 3 hours.

By the end of it I knew all about my upcoming operation & how to deal with the catheter post surgery.  The da Vinci robot surgery is day surgery with overnight stay.

The anaesthetist warned me about my beard…not all anaesthetists like beards!  Hmmm.  He also wanted me to have a pressure test of my eyes.  The surgery is carried out in a head down bum up stance.  They are concerned about damage to the eyes.

I saw my ophthalmologist Celia Chen (North Adelaide | SA | AU).  I have borderline high pressure in the eyes.  However for 3 years the pressure has been static and the other 2 indicators of glaucoma (damage to the back of the eye & blind spots are not evident).  Celia was not concerned about eye pressure wrt the operation & anyway my pressure has reduced since last time…interesting!

First an elaboration on how I got here.

My next test 3 years later returned a PSA level of 6.9.  So off to the urologist Darren Foreman of South Terrace Urology (Adelaide | SA | AU) I went.  Finger up the bum confirmed an enlarged prostate (not unusual for my age) and a lump (not desired at any age).

The next week  I had the biopsy.  My urologist  uses an interesting contraption inserted via the rectum.  It uses ultrasound so he can see where to go, injects the local anaesthetic and takes the samples.  By sample 8 I had had enough, by sample 12 it should have been over…but he took 1 more…or I can’t count!  A few days later there was blood in my ejaculate…nothing in my urine or bowel movements.  All this was normal.

2 of the 12 samples from the biopsy had cancerous cells.  The Gleason score was 7 or 8.

More tests followed, MRI, CT scan and a bone scan.  The MRI showed the cancer clearly up against one side of my prostate with some haziness adjacent indicating it may have burst out or this was just clotting & bruising from the recent biopsy.  The CT scan showed the same.  The bone scan came up with 3 hot spots, 2 in the bottom left rib & 1 in my right shin.  The CT scan showed nothing in the same rib.

Darren Foreman suggested as I was a young bloke (54 is young…yay!) that surgery (particularly robotically assisted radical prostatectomy) would be the best option and referred me to a surgeon within his practice.

The surgeon Peter Sutherland is a guru with the da Vinci robot.  He dismissed the hot spots on the bone scan as I had no other indicators of spread of the cancer.  Arthritis and damaged bones show up as hot spots also.  Surgery was set for 11 March 2010.

I researched the robot vs open cut mining and surgery vs radiation therapy.  I could not get my head around the radiation.  Surgery just seemed so clean.  So I went back to my GP Wai Lee NG  who set my mind at ease by saying that if he were in my shoes he would do whatever Peter Sutherland recommended without question.

So all that was left now was to wait!  Three months!

PROSTATE DENIAL! DON’T BE A DENIER. DON’T BECOME A STATISTIC!

I wish to bring to your attention the importance of testing for prostate cancer in males once they have reached 40.

Why…because I have just (November 2009) been diagnosed with a cancer in my prostate.

How did I found out?  I started being tested after I turned 50.  I had to twist my GP’s arm to arrange blood testing as I had NO symptoms.  The only test I was having was the P.S.A. count from blood.  Three years on and the enzyme level is high.  A quick trip to the urologist, a quick rectal exam…five seconds it takes…no longer, no pain!  We have a lump.  Biopsy a week later…yes there is cancer.  Then an MRI, a CAT scan and a bone scan…all painless.  Lymph and bones look clear.  Because I am young (54 is young?) best option is surgery.  We have the best gear (da Vinci robot) here at the RAH so in a couple of months my prostate will be a goner.

Blokes…get tested.  Doctor not agreeable?  Find another.  See a urologist.  Partners…make sure your blokes do this.  Don’t wait…if you are 40 or older…start being tested.